The COP27 climate summit kicked off this week in Sharm El-Sheikh, Egypt. As parties to the climate change treaty gather to review annual progress on reducing carbon emissions, one key issue at the forefront for many activists is the impact the climate crisis is having on poorer countries. These nations bear the brunt of erratic weather patterns and intensifying environmental disasters, despite contributing relatively little in terms of global carbon emissions. In particular, there is growing attention on conflict and crisis settings, where the need to mainstream climate adaptation, mitigation, and disaster risk reduction across aid action is no longer a ‘nice to have’ but a must.

In many crises, we are seeing how droughts, floods, and rising temperatures are worsening humanitarian conditions, triggering new cycles of displacement, eroding livelihoods, and contributing to food and water shortages. Using geospatial analysis and participatory data collection approaches, IMPACT is helping to inform aid actors by generating an actionable evidence base in challenging environments. Below is a roundup of our most recent research.

According to the UN’s 2019 Global Environment Outlook, Iraq was ranked 5th amongst countries around the world most vulnerable to the effects of climate change. Reduced rainfall has contributed to significant water access issues, which has eroded longstanding agricultural livelihoods, triggered displacement in search of new economic opportunities, and caused a loss of biodiversity and disruption to ecosystems. 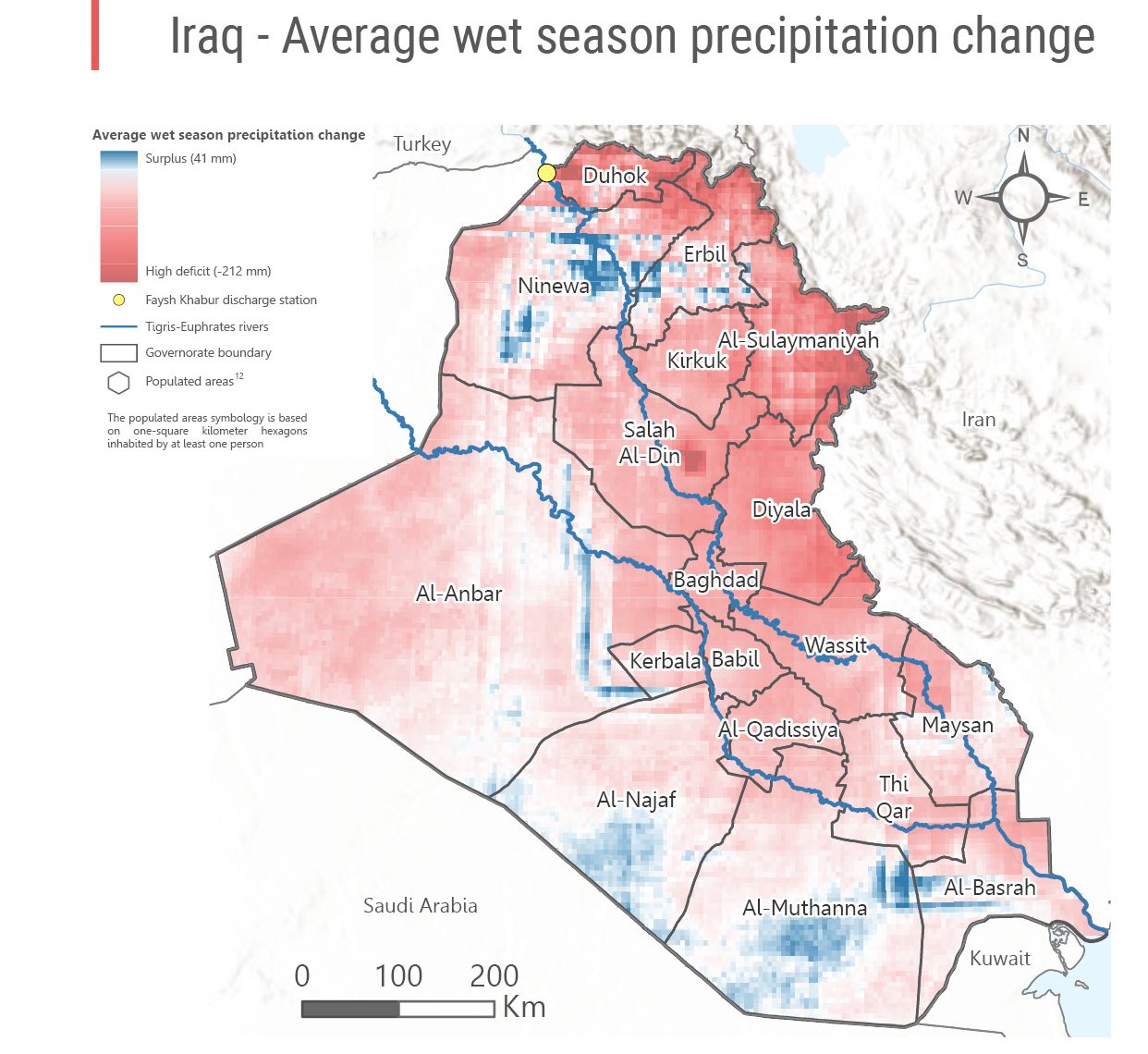 Using earth observation techniques, our team in Iraq produces regular analysis of precipitation change in the country. This involves calculating rainfall deficits based on satellite imagery and remote sensing data, using Google Earth Engine to compare rainfall during the most recent wet season (October to May) against the historical average from 1981-2021.

This analysis found that precipitation deficits were widespread throughout Iraq but highest in the north, historically the region that received the most rain. Because rainwater from the north feeds into rivers in the centre and south, there is a risk of water shortages and deteriorating water quality across the country. In total, the calculated average deficit for the 2021-22 wet season amounts to around 15,000 million cubic meters of water.

South Sudan has faced intensifying dry and wet seasons for the past several years, with drought-like conditions followed by severe flooding that exceeded seasonal norms. Recurrent flooding has led to widespread displacement – over one million people in 2020 – destruction of livelihoods, worsening food security, and contamination of water sources, compounding existing insecurity in many regions of the country.

Our team in South Sudan has been monitoring cyclical drought and flooding patterns for several years, both through interviews with recently displaced people with knowledge of conditions in flood-affected areas, and through remote sensing analysis. The latest analysis of satellite data from 2019-2022 shows that Unity, Warrap, Joinglei, and Upper Nile are the states most affected by multiple years of flooding. 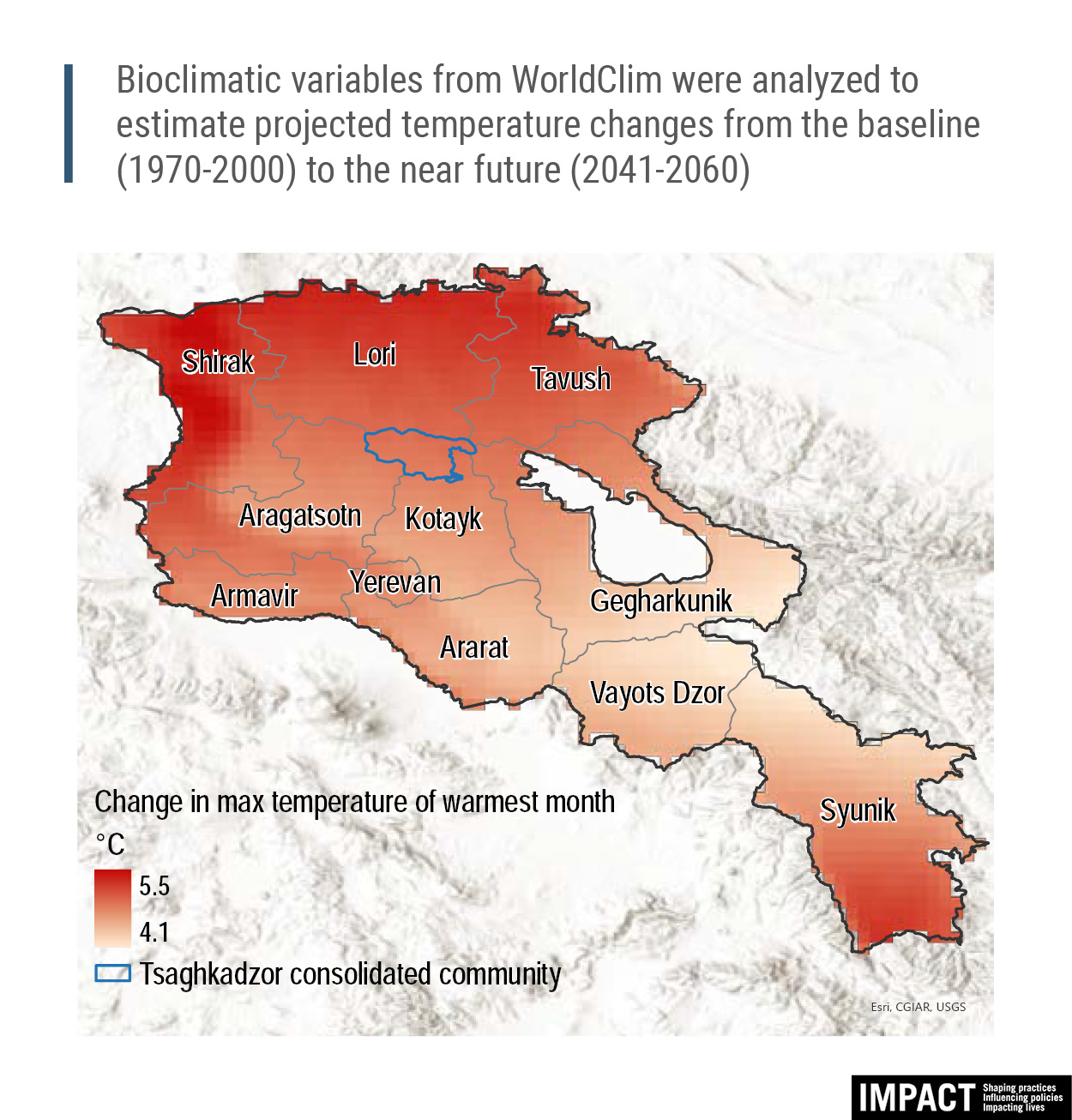 IMPACT first deployed to Armenia in response to the 2020 conflict in Nagorno-Karabakh. However, the country has faced the threat of environmental and man-made hazards for years, such as earthquakes and fires. Past studies have also indicated the need for disaster preparedness in vulnerable rural communities, especially for the refugee-like population that moved from Nagorno-Karabakh as a result of the hostilities.

Together with our sister organisation ACTED, IMPACT conducted an area-based risk assessment (ABRA) in the mountainous region of Kotayk, where climate change-driven hazards are considered the top disaster risk to the area’s residents and their livelihoods. The ABRA utilised open-source geospatial data on hazard exposure, combined with additional analysis of secondary data on vulnerabilities, to identify hazard risk for individual settlements.  The assessment found that the risk level and potential impact of hazards was different depending on the individual settlement, due to variation in coping capacity, adaptive capacity, and susceptibility.